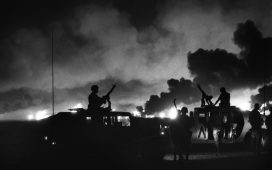 An incredible double solo exhibition by Francesco Cito, one of the best Italian photojournalists, who for forty years has been describing the war theaters around the world (including Afghanistan in 1980, the Gulf War in 1990, the 1987 Intifada – 1993 and many others).

Conflicts in Black & White
“War also to tell it is a set of atrocities. War carries within itself the most miserable and ruthless ugliness that the uninvolved man can imagine. What the common man, the traveler who walks the roads of the life of all days, the lucky being who does not have to collide with this atrocious reality, can hardly imagine or perceive what it really represents. You may have seen a thousand documentaries, read hundreds of volumes and articles, looked at thousands of photographs, but, all the possible documentation, it will never be able to convey what war is and exhales. What is missing and not transmissible to those who see it from a distance is the stench, the stench that permeates everything and everything. The acrid smell of the smoke that emanates from the things that burn, the very ones built by the hand of man; houses, means of locomotion, fighting machines. And again; the tarry smell of which the dense soot of the the oil, which burned by the hundreds in Kuwait during the first Gulf War, which penetrated the nostrils to asphyxiate the lungs. A soot so thick as to darken the sky at noon as in a night without moon or stars. It’s still; the stench of the organic excrements of the garbage piled up for days and days and that no one removes anymore. It’s still; the stench of the rubber of burnt tires, to create barricades from the last impassable trench, in the clashes between Israelis and Palestinians during the Intifada, or during the upheavals in the streets, civil wars and social clashes. […] ”

Sardinia
“Sardinia, the second largest island in the Mediterranean, is a land made of harsh sunsets dominated by clouds swollen with rain and long, crepuscular horizons. A land of melancholy, of deep and hidden feelings, a people forged by time and adversity. , where work in the fields is still biblical effort. A very different region from the best known in that sort of Disneyland that is the Costa Smeralda, an island on which an anthropological catastrophe looms, made up of countries that are depopulated inside while wild urbanization advances to satisfy the appetite of speculators, due to the ignorance and insensitivity of the rulers on duty, where the rare presence of the state is represented by a carabiniere in the background of a procession, in the land that has more sheep than people and where there is still the culture of the horse more than the machine.”

Also on display is a selection of photos taken from the Mythography editorial project, which sees Cito in the role of super guest.