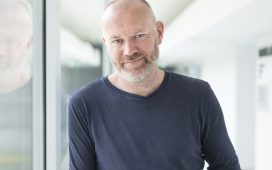 Speech by Nick Turpin, in a conversation with Angelo Cucchetto, art director of the Festival