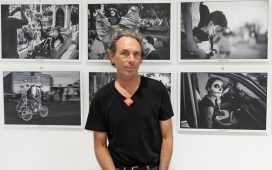 Opening hours:
From 10am to 8pm

El Día de Muertos, or the Mexican Day of the Dead Festival, shares similarities with Halloween, including some similar practices, from decorating with pictures of skeletons, to ghoulishly shaped sweets, like the famous pan de muertos (bread of the dead) or the sugar calaveras (skulls). But el Día de Muertos, which may be one of Mexico’s best-known holidays, consists also of a blending of European traditions brought by the invading Spanish conquistadores and the indigenous traditions of the peoples of Mesoamerica.

Pre-Hispanic cultures believed that during these days of the year the souls of the departed would return to the realm of the living, where they could visit their loved ones. With the arrival of the Spanish and Christianity, the new rulers of Mexico attempted to marshal the celebrations dedicated to the dead under the auspices of All Saints Day (November 1st), and All Souls Day (November 2nd). The dates of these two Catholic holidays are now celebrated in Mexico as los Días de los Muertos.

The author:
Photography has been Joe Patronite’s only career since his teenage years. Professional experiences contribute to his in-depth knowledge of him in all aspects of this area of ​​visual communication, having been active in the sector during the technical advances from black and white or analog to color, through all the advances in digital photography.

While he was a newspaper photographer and photo editor, he earned three nominations for the prestigious Pulitzer Prize for photography.

After leaving the newspapers, Patronite has been involved in sports all over the world for twenty years. During this time he has covered multiple Olympic Games, World Cup football, cycling, including 10 times the Tour de France, American football and the National Hockey League in North America. Editorial assignments and advertising commissions took him further 40 countries around the world and almost all of the United States.

As curator, Patronite has assembled exhibitions for public installations for hospitals, galleries and art museums. Personal photographic art has been exhibited in single and group exhibitions for over three decades.
Single and serial images have won 60 awards from 2020 to 2022 alone, in international photo competitions