Photo and video creativity: with Nick Turpin and Joseph Ford 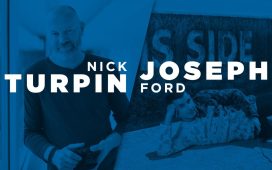 Two photographers, two strong and different authorial figures: Nick Turpin, a pillar of the world street photographer, and Joseph Ford, a creative photographer who has worked for the most important brands in the world. A meeting / discussion on the respective concepts of creativity.

Nick Turpin is a London based street photographer. In 2000 he founded the international collective iN-PUBLiC, which has played a significant role in the modern revival of interest in street photography as an approach.
Nick is artistic director of the STREET LONDON festival and creator of the #canpubphoto initiative to identify “candid” photography online.
Nick is also a seasoned advertising, design and editorial photographer, with leading campaigns for brands such as IBM, Toyota, Barclays Bank and Jaguar. His recent book “On The Night Bus” explores the lives of London bus commuters who travel in the winter months. Nick has taught Street Photography at the Tate Gallery, the Sony World Photography Organization, the Discovery Channel and Apple.

Joseph Ford: “I started my adult life quite sensibly by studying French and Italian at the University of Cambridge and at the Ecole Normale Supérieure in Paris, then I horrified my parents by deciding to become a photographer.
The best summary of what I do is “tell stories with a contour of offbeat creativity and an occasional sprinkling of optical illusions”. Twins mixed in a wall with custom knitwear? I have them. A railway line that merges into a hinge? I got it. A lifestyle photo shoot with a cardboard teenager? Yes, I have that too.
Clients from all over the world choose me to create advertising and editorial images and videos of people outdoors or in the studio.
I love finding creative solutions and ideas and making sure everyone has fun during the process.
I like to keep the productions as light as possible. It is easier to manage, more convenient and minimizes the environmental impact.
I work with fantastic post-production and CGI studios, stylists, hairdressers / makeup artists, casting directors, location finders, animal breeders and production managers, and can find people to coordinate all the elements of a shoot.
I spent several years in Paris and I am bilingual English / French. I still work regularly in Paris and feel comfortable organizing productions in France and elsewhere on the continent.
When I’m not traveling, I live in London and spend most of my free time thinking about other ideas to turn into images. “