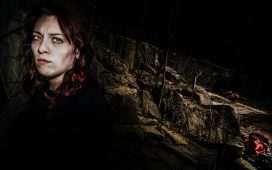 Red earth, tangled shrubs, caves, pits and dolines. This describes the wild Carso which originates on the Trieste plateau and extends beyond borders towards the far East. A harsh landscape, rich in contrast and often lashed by the violent wind Bora. In the collective imagination it recalls a bloody past and is still enshrouded in mystery, perhaps because it presents itself as a natural hiding place for those longing to disappear, or as a transgressive area fit for esoterical rites or clandestine romance. The inhabitants in fact still hold ancient and simple values in high regard, honoring home and family. They are autochthon Slovenian minorities living in Italy and Italians living in Slovenia, whose feeling of belonging is closely tied to their territory due to a long and harsh history of contested borders.
By wandering, meeting and shooting, the artists were able to penetrate this coarse reality, dependent on a farming economy but anchored to a poor and red-colored earth.

Mariagrazia Beruffi
I live between my hometown of Brescia and the city of Trieste. Following a foreign language teaching job, I began a graphics course which introduced me to photography. My focus immediately shifted not to technique but to the act of photography itself as a life-experience. My work depicts an instinctive reality, unpredictable and subjective. It usually is the result of casual encounters which, despite their transience, emerge as shared dreams, feelings and emotions.