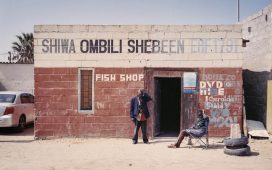 The collective exhibition will be held as usual during Trieste Photo Days festival and will open on Friday 22 October 2020 at 4 pm, in the presence of the authors, who will introduce their projects to the public and will be awarded. The exhibit will be open until January 6, 2021.

A series dedicated to the bar culture of Namibia and its predominantly female owners—the Shebeen Queens. The word “shebeen” comes from the Irish “síbín” and connotes a bar where alcoholic drinks are served without a license. In response to colonial politics and apartheid, these places initially served as a refuge for indigenous people, who were persecuted in the public sphere. These bars, which first started in township living rooms, spread and grew in the shadow of illegality to become commercial bars and subcultural hubs.

A photographic reflection on the contingent situation of the population in Milan during the lockdown period determined by Covid-19, with a gaze that invites us to meditate on the new time of the human condition. A time that is always physically the same, where life continues suspended in the everyday routine of its own living space, while outside everything becomes foreign and unreal.

The “Requiem for pianos” series is a proof of Romain Thiery’s attachment to music and photography. He says that both are his passions. Tirelessly practising Chopin on his grand piano in his workshop-house, he is also the photographer who, on one of his urban explorations, captures the picture of an instrument lying there and further intensifying the mystery surrounding the place.

The problem of sea pollution is at the center of this project by Antonio Tartaglia. “Fishing For Plastic” is a seabed cleaning initiative carried out by the Marina of San Benedetto del Tronto, in Italy, with a fleet of 40 fishing boats and over 100 fishermen (the largest ever engaged in Italy for fishing activities aimed at combating marine pollution ): it has collected over 24 tons of waste from the Adriatic in just seven months from the second half of 2019.

We would also like to point out the beautiful projects that did not pass the pre-selection phase: “Headstrong: The Women Of Rural Uganda” by Dan Nelken, “Love Of Curves” by Frank L, “Coal Survivors” by Alain Schroeder, ” A Moon Of Nickel And Ice ”by Ann Nikonenok.