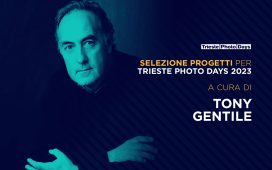 The selection of photographic projects is open! Projects will be evaluated by Tony Gentile, super guest of Trieste Photo Days 2022, for an exhibition at the 2023 edition of the festival.

The works received will be selected by a special-guest: Tony Gentile, Sicilian photographer famous for reporting on the Mafia wars (his photo of judges Giovanni Falcone and Paolo Borsellino taken a few months before their death became iconic).

To 2-3 of the best projects, Tony Gentile will also send a short written professional advice, in order to offer the photographer a moment of verification and comparison, as well as tips and advice for growth.

» Technical characteristics of the images

Tony Gentile began his profession as a photojournalist in 1989 in Palermo, the city where he was born, collaborating with the local newspaper and at the same time with the Sintesi photo agency in Rome. Thanks to this, in 1989 he began to publish his photographs in major Italian and foreign newspapers and magazines and in 1992 he began a collaboration with the international press agency Reuters.
The beginning of his career corresponds with the tragic attack of the mafia on the state that culminated in the attacks of 1992. Tony talks about that war clearly, without ever taking his eyes off the daily life of his city and his people. He coldly recounts the massacres, the strong reaction of the healthy part of the city that rebels against mafia violence and the reaction of the state that culminates in the arrests of the biggest bosses of Cosa Nostra. This long reportage was then the main theme of his book “The war – a Sicilian story” – and Postcart – published in 2015 and of the new volume “Sicily 1992 Light and memory” and Silvana Editoriale published in 2022.
From 1997 to 2003 he divides himself between freelance work, which leads him to work for the major Italian and foreign newspapers, and the profession of photography teacher. In 2003 he moved to Rome where he became a member of the Reuters staff for which he will work around the world until 2019. During these 16 years he has covered current affairs, sport and costume stories of an international nature, photographing 3 Popes during their travels apostolates around the world and important sporting events such as world football championships and the Olympics.
Now that he has left the frenetic world of current affairs photojournalism, he dedicates himself to slower projects, both photographic and video-documentary, to the realization of workshops and is strongly engaged in an awareness campaign for the modification of the Italian law on the right of author.
http://www.tonygentile.it/