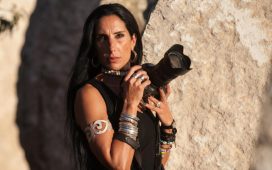 Echoes of Christian Jerusalem
This is an invitation to embark on a magical mystical tour, a glimpse into a secret world through a labyrinth of chapels and altars, a kaleidoscope of colours and textures, a unique fusion of people and cultures.

Tucked away, deep in the maze of winding, narrow streets in Jerusalem’s Old City, stands the Church of the Holy Sepulchre, one of the most famous but least explored religious sites in the world.

The church was built on the spot where Jesus is believed to have been crucified, buried and resurrected, the very place where Christianity was born. The church of the Holy Sepulchre was constructed by the Byzantines and rebuilt by the Crusaders. It remains the most popular destination for countless Christian pilgrims form across the globe.

Clergy and believers chant words of prayer in a mix of languages last heard in the Tower of Babel. Bishops conduct exotic rituals in biblical Aramaic as other ancient tongues echo through the darkness of Christianity’s most sacred shrine. Mysterious monks circle the tomb swinging aromatic incense, as rays of magical light break through. It is an enigmatic mix of rituals belonging to some of the earliest Christian sects, still conducted today. It is perhaps the only place in the world where processions and masses converge under the same roof and a diverse crowd of worshippers recites prayers side by side.

Over the past seventeen centuries people from all over the world have been drawn to the ancient, sacred stones as if by a magnetic power: pilgrims in ecstasy, enlightenment in their eyes, praying with the ultimate expression of devotion, not leaving before they have touched, kissed, prayed and knelt before every sacred altar. Outside, transfixed worshippers carry wooden crosses as they retrace the last steps of Jesus along the winding path of the Via Dolorosa that comes to an end at the Holy Sepulchre.

Jerusalem is not just the focus of international political attention; it is also the focus of the three great monotheistic religions. Ancient texts and maps describe Jerusalem as “the centre of the world”, the world’s point of beginning. Halfway between east and west, Jerusalem has not become a melting pot, but remains a mosaic in which cultures and religions mix yet never combine, each remaining as distinct as possible from the other.

The Christians are an ever-dwindling minority in the Middle East and the different streams share a common concern about their future in the region. But instead of being united by belief inside the Church, they are often divided, each fighting a constant battle to preserve its ethno-religious identity.

A centuries-long struggle over power and territory left the church divided between six denominations of Christianity. The fierce devotion with which each faction guards its turf is legendary. Three main sects – Roman Catholic, Greek Orthodox and Armenian – have principal custody of the church under an edict issued in 1852 by the ruling Ottoman Sultan, known today as the Status Quo agreement. The additional denominations, Coptic (Egyptian), Syrian Orthodox and Ethiopian, are given space and rights within the church. The Sultan’s Status Quo froze time.

Centuries of unchanged religious traditions and multi-ethnic domination combine into a unique and extraordinary collage of people and faith, not seen anywhere else.

Temple Quest- A messianic quest to resurrect Biblical reality in the heart of the Middle East
For them it’s a dream. For everyone else it’s the biggest nightmare with the potential to spark World War III. Seeing a Third Temple built in the heart of Jerusalem’s Old City has been the desire of Jewish souls worldwide for nearly 2,000 years, but one which for most remains a pipe dream.

For a growing number of messianic Jews, this is no wild fantasy but a burning objective which is slowly becoming a reality, step-by-step, as they prepare for the day when the Temple and the ancient Biblical system of sacrifice once again stands at the heart of Jewish life. With the backwind of politicians, reflecting the changing political climate in Israel, the Temple Advocates groups move from the margins of society to the forefront of discourse.

Jerusalem is known to the world for its skyline, which for the past 1,300 years has been dominated by the golden Dome of the Rock. It is at this very location, which is revered by Muslims as the third holiest site in Islam, that these modern-day zealots are focusing their efforts in the hope that one day, the Holy City will have a new skyline – one dominated by the towering structure of the Third Temple.

For them, the Temple is not just a place; it’s an existential part of Judaism that was lost, a way of life they wish to restore at the heart of which was the sacrificial system of atoning for sin that was established back in the days of Moses.

The various Temple organizations, among them the Temple Institute work to prepare for the arrival of the Messiah and the rebuilding of the Temple with the meticulous job of crafting all the sacred vessels and accessories necessary to enable ritual service to take place in the Temple- all of them made according to exact specification laid out in the Bible referring to it as a manual guide. Priestly robes, musical instruments made of precious metals and a giant golden candelabra as the one depicted in the Arch of Titus in Rome are just a few of the items awaiting the day when they can be put into service. Jewish Priestly garments have not been worn since the 2ed Temple was destroyed 2,000 years ago and they have also set up a school for training priests who can be ready to serve when the time comes.

Each year at Passover they carry out the “ritual slaughter” of a lamb to get the people ready for a return of an age-old system of sacrifice. What began some 15 years ago as an underground secretive event with a handful of people has turned in the recent years with the help of social media to a family public event with local politicians and spiritual leaders as honor guests.

The activists also work to raise public awareness about the Temple and its central role in the Jewish spiritual life, and employs full-time staff who research the structure of the Temple and are these days are busy drawing up working architectural plan for its reconstruction.