“The streets of Kabul” by Monika Bulaj 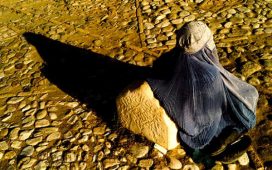 “A solitary journey in the land of the Afghans. Sharing food, sleep, fatigue, hunger, cold, whispers, laughter, fear. Moving by bus, taxi, horses, truck, on the back of yaks. From the Iranian border to the Chinese one on the Wakhan snows, armed only with a notebook and a Leica”.

Born in Warsaw in 1966, Monika Bulaj is a photographer, reporter and documentary filmmaker, she carries out her research on the borders of faiths, ethnic and religious minorities, nomadic, migrants, untouchables, dispossessed, in Europe and Asia, Africa and the Caribbean.
She publishes with La Repubblica, Corriere della Sera, Gazeta Wyborcza, Revue XXI, International, Geo, Courier International, National Geographic, Time Lightbox, The New York Times Lens, Al Jazeera.
She studied philology at the University of Warsaw, and followed courses in anthropology, philosophy and theology. Self-taught in photography. She studied theater of research and dance. Actress, teacher and theater director until 2002. She simultaneously teaches photography, street theater and stilts to children in at-risk communities.
She writes in Italian and Polish, speaks eight languages, has three children, lives in Trieste.
She directed and scripted the documentary film “Sons of Noah” (producer: Lab80 FILM) and signed the screenplay for “Romani Rat”, directed in 2002 by M. Orlandi, on the holocaust of Roms, made with the contribution of Shoah Visual History Foundation.