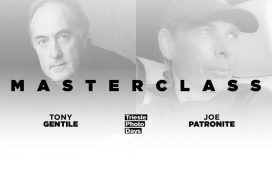 Tony Gentile is a Sicilian photographer famous for reporting on the mafia wars: his photo of judges Giovanni Falcone and Paolo Borsellino taken a few months before their killing has become iconic. In the Masterclass The News Photographer Gentile will retrace his career as a photojournalist which coincided with some of the most significant events in recent Italian history.

Joe Patronite is an American photographer, photo editor and curator, with hundreds of reportages and three nominations for the prestigious Pulitzer Prize for photography. In his Masterclass Creating the Long-Term Visual Essay Patronite will cover the multiple ways a documentarian formulates an idea, researches, selects the subject matter, and produces a meaningful picture essay. The Masterclass will discuss ways to explore themes, theory of the essay, interacting with subjects, and finally implementing strong visual coverage in still, cinematic, or multimedia form.

Participation is reserved for Exhibit Around APS members (registration by filling out the workshop registration form).

Tony Gentile
Tony Gentile began his profession as a photojournalist in 1989 in Palermo, the city where he was born, collaborating with the local newspaper and at the same time with the Sintesi photo agency in Rome. Thanks to this, in 1989 he began to publish his photographs in major Italian and foreign newspapers and magazines and in 1992 he began a collaboration with the international press agency Reuters.
The beginning of his career corresponds with the tragic attack by the mafia on the state that culminated in the attacks of 1992. Tony talks about that war clearly, without ever taking his eyes off the daily life of his city and his people. He coldly recounts the massacres, the strong reaction of the healthy part of the city that rebels against mafia violence and the reaction of the state that culminates in the arrests of the biggest bosses of Cosa Nostra. This long reportage was then the main theme of his book “The war – a Sicilian story” – and Postcart – published in 2015 and of the new volume “Sicily 1992 Light and memory” and Silvana Editoriale published in 2022.
From 1997 to 2003 he divided himself between freelance work, which led him to work for the major Italian and foreign newspapers, and the profession of photography teacher. In 2003 he moved to Rome where he became a member of the Reuters staff for which he will work around the world until 2019. During these 16 years he has covered current affairs, sport and costume stories of an international nature, photographing 3 Popes during their travels apostolates around the world and important sporting events such as world football championships and the Olympics.
Now that he has left the frenetic world of current affairs photojournalism, he dedicates himself to slower projects, both photographic and video-documentary, to the realization of workshops and is strongly engaged in an awareness campaign for the modification of the Italian law on copyright. .
www.tonygentile.it

Joe Patronite
Photography has been Joseph Patronite’s only career, having been first being published in his teens. Professional experiences contribute to his deep knowledge in all facets of this area of visual communications, having been active in the industry during technical advances from black & white or color analog, through all the advances of digital photography.
While a newspaper staff photographer & picture editor, documentary & breaking-news coverage garnered three nominations for the prestigious Pulitzer Prize for Photography.
Upon leaving newspapers, Patronite covered sports, worldwide for twenty years. During this tenure, he covered multiple Olympic Games, The World Cup football, cycling including 10x the Tour de France, among major sports such as American Football and the National Hockey League in North America.
Editorial assignments, and advertising commissions have taken him to over 40 countries worldwide & nearly the entirety of the United States. Since 2000, Patronite’s attention has been on producing long-term photographic essays.
Currently, Patronite is producing a long-term photographic essay entitled “My Americana”, a contemporary visual documentation of his home country. A series from this on-going project were on display at Trieste Photo Days, Urban Awards in 2021.
As a curator, Patronite assembled showings for public installations for hospitals, galleries & Art Museums. Personal photographic art has been exhibited in single & group shows over three decades. Single images & series have garnered 60 awards in 2020 to 2022 alone, in international photography competitions.
www.patronite.com