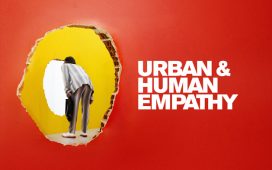 Stefano Ambroset and Roberto Srelz present the book “Urban & Human Empathy”, part of the first photographic project launched by Exhibit Around platform, focused on human presence immersed in the urban context.  The project, which involves 49 photographers from around the world, includes a volume and a series of international exhibitions.

Christine Miess was born in 1977, lives and works in Vienna. After studying communication and theatre at the University of Vienna got her degree in 2015 in artistic photography. She won numerous awards and exhibited at important galleries and festivals, including MAK – Austrian Museum of Applied Arts / Contemporary Art and the Athens Photo Festival.

Stan Raucher was born and raised in Minnesota at the time of black and white TV, of photographic documentaries on Life magazine and the publication of  The Family of Man by Edward Steichen. His photographs have been published on LensWork, Adore Noir, Slate, Black & White Magazine, The Daily Mail, The Independent, Featureshoot, Camera Arts and Datum Seiten der Zeit. He had more than twenty international personal exhibitions. Among the exhibition venues, the Blue Sky Gallery of Portland, Lishui Museum of Photography and the University of Washington Hall Health Center.