“This is not Korea” by Alain Schroeder – Exhibition presentation 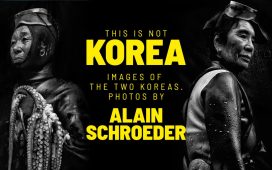 The Museums and Libraries Service of Trieste’s Municipality, in collaboration with dotART Association, for the third consecutive year, presents a series of expositions/occasions aimed to investigate the interaction between contemporary photography and museums in occasion for the seventh edition of Trieste Photo Days – Festival of Urban Photography.

Sunday 25 October at 11.30 am, at the Sala Xenia, the opening of the exhibition This is not Korea. Images of the Koreas in Alain Schroeder’s shots will be held alongside the author’s presence, the presence of Councilor Giorgio Rossi and the director of the Museums and Libraries Service Laura Carlini Fanfogna.

The exhibition will be on view at the Civico Museo d’Arte Orientale, in Trieste via S. Sebastiano 1, until the 6th of January 2021 with the following opening-hours: from Thursday to Sunday, from 10 am to 5 pm.

Korea is the protagonist of this photographic exhibition, a country almost completely omitted from the richest collection of the Civici Musei di Storia ed Arte.

Two woodcuts, works of the notorious artist Katsushika Hokusai, selected by Michela Messina, curator of the Civico Museo Orientale, alongside two photographic testimonies on Korea which are preserved in Fototeca, selected by Claudia Colecchia, responsible for the Fototeca and the Biblioteca dei Civici Musei di Storia ed Arte.

These abovementioned selections interact with the contemporary photos which Alain Schroeder took in Korea, suggested by the Festival’s art director Angelo Cucchetto and the president of the Association, Stefano Ambroset.

The two works of Hokusai both represent the procession of a Korean embassy from the bottom of mount Fuji and they belong to ehon (illustrated books).

The members of the processions which formed the embassies visiting shōgun Tokugawa were the only foreigners that the Japanese people of the Edo era could encounter during the sakoku, the act of isolating the country from the outside. These imposing processions, formed by hundreds of people, splendidly dressed and accompanied by musical bands, aroused the public’s enthusiasm and attracted artists attention.

The most ancient print, a loose piece of paper extracted from a volume, has been exposed for the very first time to the public with its correct attribution to the great Japanese master, thanks to Stefano Turina’s research, a PhD student in Japanese arts. The other incision is included in the III volume of the notorious illustrated book Fugaku Hyakkei (One Hundred Views of Mount Fuji).

The most ancient form of photography is a carte de visite (6 x 10 cm) produced by Wilhelm Burger <1844-1920> and it is a part of the fund donated to the Town Hall by Maria Piacere in 1940. The Wein photographer participates as an official photographer in the year 1868, to a commercial diplomatic expedition which will allow him to visit the Siam, China and Japan.

The positive immortalizes a half-naked Korean: a typical example of an ethnographic portrait which was widely used in 19th century albums. It’s a genre which contributed to the propagation of the exoticism movement and allowed one to acknowledge the other, the stranger.

The second is a postcard, created by the Nipponic editor Kamigataya Heiwadō, probably between 1905 and 1907, when Korea was a Japanese protectorate. The photo portrays the main street of Chemulpo, modern day Incheon, in South Korea, during the celebration of the end of the Russian-Japanese war.

The photographer chooses to leave for Korea in order to realise a project dedicated to the Korean martial art of Taekwondo (which literally means “the way of foot and fist”), created in 1955 by general Choi Hong-hi. During his stay at Pyongyang, the photographer managed to take shots of various areas of the city under the dictatorship of Kim Jong-un. However, it’s a precious photographic documentation that – as the photographer himself suggests – does not faithfully revoke the country as it is conditioned by manipulative mechanisms of the regime’s information, since this photoshoot has been carried out under the strict censorship control of two official guides who showed what to observe and photograph.

Alain Schroeder is a Belgian photographer, born in 1955. He discovered a passion for photography at a very young age thanks to sector magazines such as Photo and Zoom. His work is a mixture of photojournalism, contemporary documentary, influenced by the surrealist movement, particularly by Magritte and Delvaux.

For over three decades he has been working in the photographic sphere, first as a sport photographer in the fields of Roland Garros, Wimbeldon, Us Open, he then dedicated himself to travel books, art and architecture. He curated more than thirty volumes dedicated to China, Iran, the Renaissance, ancient Rome, European Gardens, Thailand, Tuscany, Crete, Vietnam, Budapest, Venice, European Abbeys, natural European sites, etc. He published his photos in prestigious magazines such as National Geographic, Geo, Paris Match.

He won numerous international prizes, including a Nikon Japan award for the series Who Will Save the Rohingya, the TPOTY award (travel photographer of the year) for two series: Living for Death and Kushti, World Press Photo 1st Prize Sport Stories for the Kid Jockeys series.

He participated to numerous exhibitions throughout the world.

We remind you that, in order to respect the rules of social distancing established in order to maintain the COVID-19 contagions, the access to the Museo Revoltella Auditorium is free until places are exhausted, in a number of 50, and the public’s access to the Civico Museo d’Arte Orientale is limited.