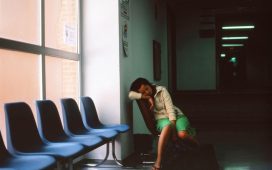 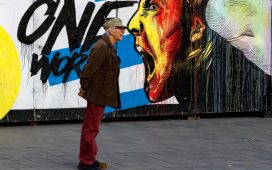 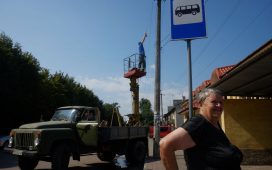 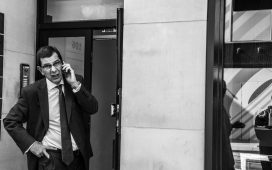 London suits as the photographer Nik Erik Neubauer calls them.

Random viewers could easily think, that these are carefully arranged photos, maybe fashion photos, or even glimpses from a performance of some street theatre.

And yet this is the kind of street photography where author curiously explores the urban environment, boldly reveals it, but does not dictate the events.

For him or her the street is a spontaneous venue. The work of documenting, however, is deliberate, very thoughtful.

Nik Neubauer was fascinated by businessmen and their rush in London.

On the street. On the Tube.

When we put photos of these dehumanized and impersonal men into the context of social experience and we recognize them not only as aesthetic but also as interpretative value, they become dramatic.

Then it’s difficult to remain indifferent and questions about what kind of world we’re living in begin to emerge.

And this is the most, at least in my opinion, what an author can achieve with his or her work.

Born 1994 in Ljubljana, has graduated from photography on VIST – Department for photography.

His main interest is photojournalism and street photography.

In 2013 he was working with WHO on a project “Health for the World’s Adolescents”, in 2014 he was one of the winners of The Other Hundred photo contest.

In 2015 he was on a workshop with street photographer Cheryl Dunn, and after that he had group exibition in Galerija Fotografija.

In 2016 he went on a workshop with Simon Chang and had group exhibition in Cankarjev Dom.

In June, 2016 he was part of exhibition ISO0 which was part of Month of Photography in Ljubljana.

There he presented his zine Street Pirate Material, which was selected for exhibition “2016 days of awesome photo books”, LhGWR gallery, The Hague.

In 2018 he won first and third prize in fashion category on a Photodays Rovinj.

Currently is he studying a master study of photography on the Academy of Fine Arts and Design in Ljubljana.