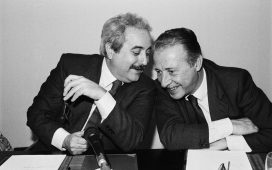 The name of Tony Gentile is almost unknown to the general public, although he took an extraordinary photograph that everyone knows and that has become an icon of contemporary Italian history: the image is that of Giovanni Falcone and Paolo Borsellino talking in confidence.
Tony Gentile took this and other photos in the terrible years in which the mafia war bloodied Sicily, sowing only the dead.

Thirty years after those events, the volume collects a corpus of images captured by Tony Gentile’s lens: photographs that, from news documents, have become history, and which return a polyphonic image of Sicily, suspended between the violence of massacres perpetrated by Cosa Nostra and the tenacious resistance of the population.
A book, introduced by Ferdinando Scianna and with a text and an interview with the author collected by Carlo Sala, dedicated to a territory and an era whose memory is still deeply alive in our country.