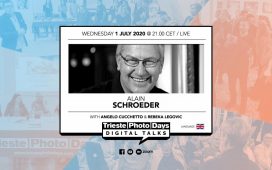 Wednesday 1 July 2020 at 9.00 pm CET we close the first season of TPD Digital Talks with a special episode in live streaming on the Trieste Photo Days Facebook page. We will have an exceptional guest, who will also be in Trieste Photo Days at the end of October: Alain Schroeder!

Alain is a prolific Belgian author and photojournalist, and he just won the World Press Photo 2020, in the Nature, Stories sections with his Saving Orangutans series.

In these months, in the midst of a pandemic, Alain has remained confined to Bishkek (Kyrgystan), where he is finishing a long-term job, and will connect from there. 😊

After the live broadcast all episodes of TDP Digital Talks are published on the dotART YouTube channel www.youtube.com/user/dotARTchannel.

Alain Schroeder is a Belgian photojournalist born in 1955. Freelance sports photographer from 1979 till 1989. In 1989 he founded Reporters (http://www.reporters.be), a well-known photo agency in Belgium. He has illustrated over thirty books dedicated to China, Persia, the Renaissance, Ancient Rome, the Gardens of Europe, Thailand, Tuscany, Crete, Vietnam, Budapest, Venice, the Abbeys of Europe, Natural Sites of Europe, etc. Belgian titles include, « Le Carnaval de Binche vu par 30 Photographes », and « Processions de Foi, Les Marches de l’Entre-Sambre-et-Meuse ». Publications include National Geographic, Geo, Paris-Match,…
In 2012, he sold his shares in Reporters and since then travels the world shooting personal projects focusing on social issues and human interest stories.
He has won many international awards including a Japan Nikon Award 2017 for the Rohingya series, the TPOTY Travel Photographer of the Year Award 2017 with the series Living for Death and the series Kushti, and 1st prize at World Press Photo 2018 for the series Kid Jockeys in the category Sports Stories,… and participated in numerous exhibitions worldwide.
He is represented in Belgium by Reporters and in France by the photo agency Rea and Hemis.