The success of Trieste Photo Days 2020

Time to take stock for this unusual seventh edition of Trieste Photo Days, whose program was inevitably marked by the Covid-19 emergency, which forced defections by some of the main guests (first and foremost the super-guests Alex Webb and Rebecca Norris Webb) and several changes to the events (including the early closure of the exhibitions on November 3rd).

On the one hand, the pandemic represented a stimulus to spread the culture of photography in a different and innovative way (the festival ideally opened in April, with the TPD Digital Talks 2020, a successful series of online talks with some of the photographers hosted at the festival in recent years). On the other hand, dotART has managed this year to set up some of the largest and most important exhibitions in the history of the festival, in synergy with its institutional partners.

Among the main events, the “legs” of the Photo Days Tour of Aquileia (Palazzo Meizlik) and Cormòns (Museum of the Territory) stood out: two large widespread exhibitions that contained the original projects of the Exhibit Around platform On the traces of the Patriarchal state of Aquileia, Generazioni and Staying Home Together, contaminated by the best of street photography from URBAN Photo Awards. These exhibitions, in particular the one on the Patriarchate of Aquileia, have been made possible thanks to the collaboration with the Municipalities of Aquielia and Cormòns, the Regional Secretariat of MiBACT FVG, the Regional Museum Direction and the National Archaeological Museum of Cividale del Friuli.
The double inauguration in the presence of the authorities, Saturday 17 October, was a great success with the public. Among the interventions, that of Emanuele Zorino, mayor of Aquileia, and Angela Borzacconi, director of the Archaeological Museum of Cividale, who collaborated on the volume on the Patriarchate as a scientific consultant.

The peak weekend of the festival took place in a circuit of exhibition venues in Trieste on 23, 24 and 25 October 2020, in full compliance with the anti-Covid distancing rules. Three days full of events, including exhibitions, workshops, screenings, contests, meetings and book presentations, culminating in the streaming meeting with super-guests Alex Webb and Rebecca Norris Webb, who crowned the American photographer from New York Harry Giglio overall winner of the URBAN 2020 Photo Awards contest. Also as part of the award ceremony, the British street photographer Nick Turpin, connected from London, awarded Valeria Sacchetti as winner of the URBAN Book Award. Also present in the room Alain Schroeder, “Best Author” for the second year in a row of the contest.

The Covid emergency has not affected the enthusiasm of the public for the dozens of exhibitions by Italian and foreign artists (almost 1,400 photos on display) presented at the festival. Among these: the exhibition This is not Korea by Alain Schroeder at the Civic Museum of Oriental Art, conceived and created by the Civic Museums of History and Art of the Municipality of Trieste, under the direction of Laura Carlini Fanfogna, director of the Museums and Libraries Service , curated by Michela Messina, curator of the Civic Museum of Oriental Art and Claudia Colecchia, head of the Photo Library and Library of the Civic Museums of History and Art. The URBAN Photo Awards exhibition-prize at the Sartorio Museum (four finalist projects by Julia Runge, Chiara Panariti & Gianfranco Ferraro, Romain Thiery and Antonio Tartaglia on display). The collective of over 150 Chromantic photos, a tribute to Alex Webb at the Veruda Room. For the first time in Italy, the Women Street Photographers exhibition, born from the very successful Instagram profile created by the New York photographer Gulnara Samoilova, presented by Ximena Echague on Friday 23 October.

Several meetings and presentations were scheduled at Sala Xenia, organized during the central weekend. Francesco Cito, a legend of Italian photography, has (virutally) collected the TPD Lifetime Achievement Award. Space also for workshops: Utopia Melara by Graziano Perotti, already sold out for months, and Trieste by night, curated by the Sicilian photographer Francesco Faraci. To crown the main program, the exhibitions of the Trieste Photo Fringe, the “widespread festival” of Trieste Photo Days which took place in a selected circuit of clubs in the city center and included group and personal exhibitions of authors from all over the world. This year the Fringe circuit had 20 exhibition venues for over 500 photos on display.

Trieste Photo Days 2020 is promoted by the dotART cultural association, in collaboration with the Museums and Libraries Service and the Tourist Promotion, Cultural and Sporting Events Service of the Municipality of Trieste, the Regional Secretariat of the Ministry for Cultural Heritage and Activities and for tourism for Friuli Venezia Giulia, with the contribution of the Friuli Venezia Giulia Region and the Kathleen Foreman Casali Charity Foundation, the main partnership of Install.Pro, Unicusano Trieste, Rete Ferroviaria Italiana and Gap, and the artistic direction of Angelo Cucchetto. 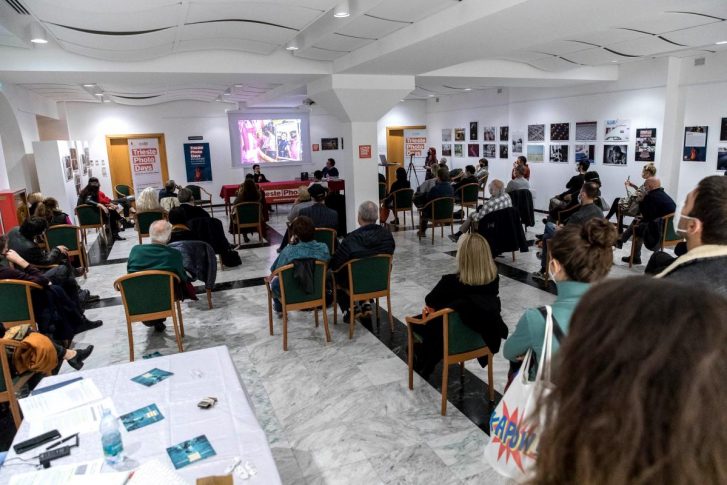