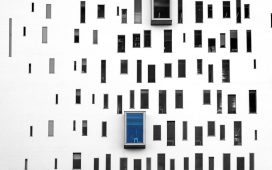 A visionary sight on the contemporary human territories in Milan, Italy. The project combines architecture an emotion focusing on absolute abstraction of the architectonical details from the background, putting them into dialogue with geometrical powerful shapes.
The detailed color shades (original ones) create an oneiric dialogue with the intangible dimension of imagination, in spite of the impressiveness of the buildings.
The harmonious embrace between the edited couples seems to seal their indissoluble closeness even in the contrast, seen as a recognition of the human unpredictable creativity.
The whole seems to be wrapped into a surreal and intimate silence.

Milan, one of the most important capitals for modern architecture.
It all started one day, when I was walking close to the Group M. Headquarters (Cino Zucchi Studio) building in Assago, Milan.
I saw that beautiful building, it was all white and the daylight of a sunny day painted the windows in blue. All the façade but a bow-window was linear. The whole was fascinating for me. But, without that detail, that bow-window, it wouldn’t have been so interesting to me, so brilliant.
So it began my study of the architecture in Milan from late ‘900 to now. I looked for the best architectural realizations from either very famous architects and young emergent ones, whose project was based on a detail. I decided to abstract the detail maintining its/their original color while turning in black and white all the sorroundings.
Every time I went on a location, I studied the best light, the best hour in the day, the best shooting position. The farther I took pictures I mapped the town with red dots.
Then, I let myself be touched by what I was looking at. I let the sight go free and be inspired by emotion.