Trieste Photo Days 2019 with Martin Parr, Nick Turpin and many other guests

Only a few days left to the long-awaited sixth edition of Trieste Photo Days, international festival of urban photography that will be held in a network of exhibition venues in Trieste, seaside city in North-Eastern Italy, from 22 October to 10 November 2019, with an eventful opening weekend: 25, 26 and 27 October.

The festival will gather dozens of exhibitions by Italian and foreign artists showcasing more than 1,700 photographs. Stands out the presence of two British super guests, for the first time in Trieste: photographers Martin Parr and Nick Turpin, who will meet the audience in two unmissable conferences.
Then there will be workshops, contests, portfolio readings, book presentations and talks with guests from all over the world. Focus is on urban photography, ranging from architecture to street photography, from territorial studies to social engagement.

The festival is promoted by Italian Cultural Association dotART, together with the Municipality of Trieste (Museums & Libraries Service and Tourist Promotion Service, Cultural and Sports Events) and the MiBACT, with the contribution of the Friuli Venezia Giulia Region and the Kathleen Foreman Casali Benefit Foundation, InstallPro and Unicusano’s main partnerships and the artistic direction of Angelo Cucchetto.

Two living legends of international street photography will be guests of the festival.

Martin Parr, one of the best-known documentary photographers of his generation, member of Magnum Photos since 1994, with over 100 books published and works exhibited at the Tate, Pompidou and MoMA in New York. As president of the jury of URBAN 2019 Photo Awards, Parr will choose and award the Winner Overall of the competition on Saturday, October 26th at 8:00 p.m. in the Sala Xenia (festival’s main venue), while on Sunday, October 27th at 12:00 p.m. he will give an exclusive talk at the Auditorium of the Revoltella Museum, together with festival’s art director Angelo Cucchetto.

Nick Turpin is the founder of the international collective iN-PUBLiC, which has played a significant role in the modern revival of street photography since the early 2000s. In Trieste Photo Days, Turpin will hold a workshop (already sold out) and a meeting with the audience, Sunday, October 27 at 3 pm at the Sala Xenia.

Exhibitions and other guests

To honour Parr and Turpin, a large tribute exhibition will be held in the Sala “U. Veruda”: Short Street Stories. 173 photographers from all over the world for over 100 photos in the exhibition that pay homage to the sardonic style of the two authors. The exhibition will be open from October 22, with official opening ceremony on Saturday, October 26 at 16, in the presence of Martin Parr. On this occasion, the volume of the project will also be presented.

Space will also be given to the photographic tribute to Leonardo da Vinci, five hundred years after the death of this great artist. Created by the Exhibit Around platform, the project “La città ideale di Leonardo” (“The Ideal City of Leonardo”) includes a group exhibition at the DoubleRoom exposition space (opening on Tuesday 22 October at 6 p.m.), a photographic volume and a conference by Edoardo Villata, professor of History of Modern Art at the Università Cattolica del Sacro Cuore in Milan (“Catholic University of the Sacred Heart”), on Sunday 27 October at 10.30 a.m. at the Auditorium of the Revoltella Museum.

The Milanese photographer Giorgio Galimberti returns to the festival, this time with his solo exhibit entitled Milano, la città che sale (“Milan, the rising city”) at the Sala Fenice of the Fincantieri-Wärtsilä photographic club. Geometric framing and metaphysical nuances in black and white, with opening on Wednesday 23 October at 6 pm. Presentation by Fulvio Merlak and Angelo Cucchetto.

Also scheduled is an important group show about the Old Port of Trieste, a jewel of industrial archaeology that looks at the future. The exhibition “Vedute e Visioni di Porto Vecchio”, curated by Claudia Colecchia, head of the Photo Library and Library of the Civic Museums of the City of Trieste, includes photos by Graziano Perotti together with historical images conserved in the Photo Library of the Civic Museums: Giuseppe Wulz, Alois Beer, Giornalfoto up to the most recent photos by Gabriele Basilico, Eugenio Novajra, Marino Ierman. Opening on Thursday 24 at 5 p.m., at the Sala Selva / Bazlen – Palazzo Gopcevich.

The Sala Xenia will host the URBAN 2019 Photo Awards Winners exhibition as well as three solo shows: Ritratti dalla Strada (Portraits from the Street) by Salvatore Matarazzo, Tornare by Mariagrazia Beruffi (TPD Portfolio 2018 winning project) and My Town Siófok II by Hungarian artist Marietta Varga. Opening on Friday, October 25 at 12 in the presence of the authors.

Also on Friday 25th at 4 p.m., at the “Sartorio” Museum, will open the exhibition-prize “Trieste’s Museums” of URBAN 2019 Photo Awards. The exhibition will feature projects by Roman Robroek (Netherlands), Francis Meslet (France), Michele Andreossi (Italy) e Maria Pansini (Italy), selected by Laura Carlini Fanfogna, director of the Civic Museums of History and Art of the City of Trieste and by Claudia Colecchia, head of the Photo Library and Libraries of the Civic Museums of the City of Trieste. The award ceremony will be held Saturday, October 26 at the Sala Xenia.

At 5 p.m. the exhibition Pescherie in dismissione a confronto: il Mercato del Pesce di Trieste e il Mercato del Pesce di Tokyo (Dismissed fish markets compared: the Fish Market of Trieste and the Fish Market of Tokyo) is scheduled to open at the Oriental Art Museum. On display a selection of objects and images from the Photo Library of the Civic Museums organised by the curator of the Museum, Michela Messina, and the head of the Photo Library and Library of the Civic Museums of History and Art, Claudia Colecchia, together with a selection of Nicola Tanzini’s Tokyo Tsukiji images, organised by Benedetta Donato, who will also present the book of the same name on this occasion. The Councillor for Culture, Giorgio Rossi, and Dr. Laura Carlini Fanfogna, Director of the Museums and Libraries Service of the City of Trieste, will be present.

Saturday, October 26 at 12:30 pm at the Scaglia Academy will be presented the double solo exhibition City of Flies by Riccardo Bononi and La via della bellezza by Umberto Verdoliva. Two unmissable exhibitions of two of the most interesting contemporary Italian authors, which offer personal insights into the panorama of authorial reportage.

A selection of 100 photos from the URBAN 2019 exhibition will be exhibited at ITIS – Azienda pubblica di Servizi alla Persona, while another large group of about 100 images will be installed at the Trieste Airport in Ronchi dei Legionari.

A new series of events are also scheduled to take place outside the city: the Photo Days Tour. The protagonists will be the best photos and projects taken by the Semifinalists of the URBAN 2019 Photo Awards, which will be exhibited in four large group shows at institutional exhibition venues in Aquileia in the Sala Consiliare (Council Hall), Cividale del Friuli at the Teatro Ristori (Ristori Theatre) and at the Monastero di Santa Maria in Valle (Monastery of Santa Maria in Valle) – a UNESCO site – and Cormòns at the Museo del Territorio (Museum of the Territory).

Several presentations are also planned, divided over the central weekend.

Saturday, October 26 at 10 am at the Sala Bazlen in Palazzo Gopcevich: presentation of the editorial project CITIES and special editions (with the two volumes already produced Back to the Past and Wedding Time), by the CEO of Isp Angelo Cucchetto in dialogue with Enrico Scaglia.

Also on Saturday 26th at 11.00 a.m. in the Sala Bazlen, there will be the presentation of the book Manuale di sopravvivenza per fotografi (Survival Manual for Photographers) by Federico Montaldo, published by emuse editor. The author and Benedetta Donato will be in dialogue with Enrico Scaglia.

On Saturday, October 26 at 14:30 at the Sala Bazlen of Palazzo Gopcevich will be presented the projects of ViaggioFotografico.it, curated by Roberto Gabriele in dialogue with Enrico Scaglia.
At 3.15 pm in the Sala Bazlen presentation of the editorial project Pleasure Island by Federico Arcangeli in dialogue with Enrico Scaglia.

At 6 p.m. in the Sala Xenia there will be the presentation of the book Trieste in Bianco & Nero (Trieste in Black & White), produced by the platform Exhibit Around.

At 6.45 p.m. the book Immigrantopolis will be presented by Polish researcher Anna Fiń of the Department of Sociology of Pedagogical Culture of the University of Krakow, curator of the project together with the cultural association dotART, followed by the award ceremony for the best authors of the project.

On Sunday 27th October at 2.30 p.m. at Sala Xenia the Hungarian photographer Marietta Varga will present the project My Town Siófok II.

At 15.15 Giedo van der Zwan will present Pier to Pier, a continuation of the project already exhibited last year.

At 4 p.m. there will be a meeting with the Belgian photographer Alan Schroeder, author of numerous evocative projects.

The program of Saturday, October 26 at the Xenia room will culminate with two awards ceremonies.

At 7.30 p.m. there will be held the award ceremony of the TPD Book Award 2019, the third edition of the free-of-charge “call for dummies” launched every year as part of the festival and aimed at selecting an authorial photographic project to be produced as a book. This year’s winner is Russian photographer Ilya Shtutsa with the project Not Only Grey.

At 8 p.m., the award ceremony of URBAN 2019 Photo Awards will take place. In the presence of the jury president Martin Parr, the final podium will be unveiled and the medals will be awarded to the Overall Winner, to the winners in each category and to the honorable mentions. The winners of the special prizes “Museum of Porec” and “Museums of Trieste” will also be awarded. After that, there will be a gala dinner with Martin Parr (private event).

After last year’s success, the TPD Portfolio will be back for the second edition, a free photographic selection based on Portfolio readings open to the public, by Fulvio Merlak, the institutional heart of Italian photography and the main contributor of Portfolio Italia.
On Saturday 26th (9 a.m. – 5 p.m.) and Sunday 27th October (9 -12 a.m.) the team of portfolio readers will be available in the Xenia room. Readers will be: Orietta Bay, Tullio Fragiacomo, Lorella Klun, Monica Mazzolini, Graziano Perotti.
On Sunday afternoon Fulvio Merlak will announce the selected portfolio that will be awarded a solo exhibition at the next TPD 2020.

The main program is crowned by the exhibitions of the Trieste Photo Fringe, the “diffused festival” of Trieste Photo Days, which takes place in a selected circuit of venues in the city centre and includes collective and personal exhibitions of authors from all over the world. This year the Fringe circuit has 28 exhibition venues with over 580 photos on display. 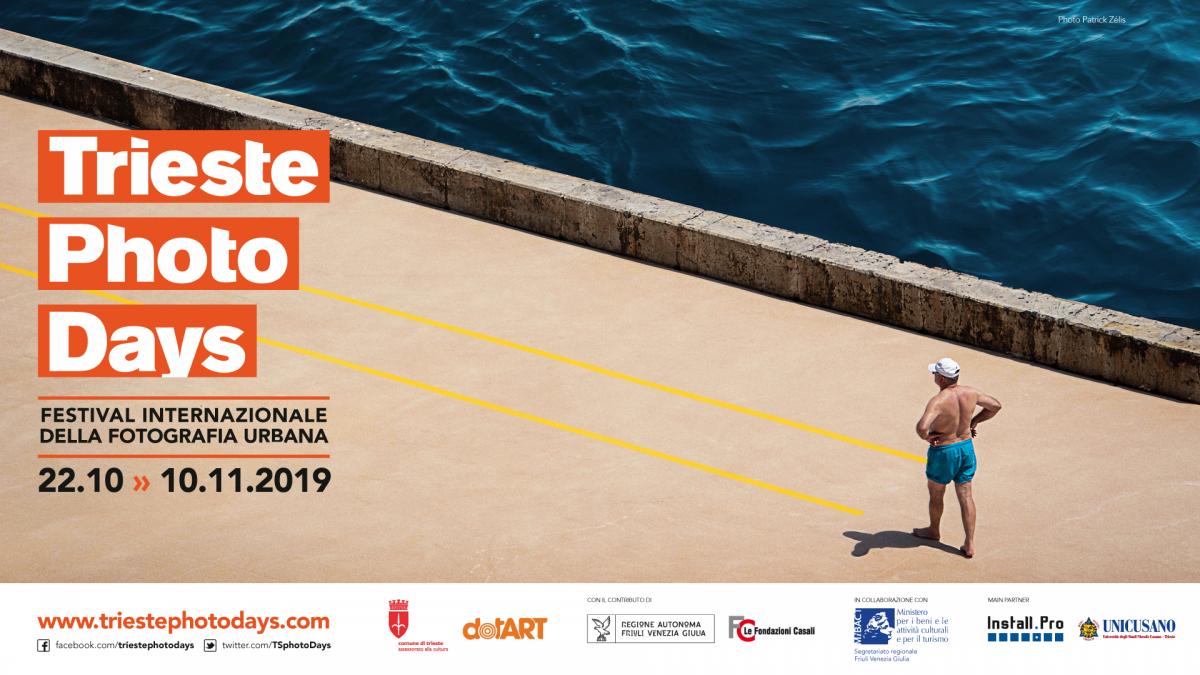 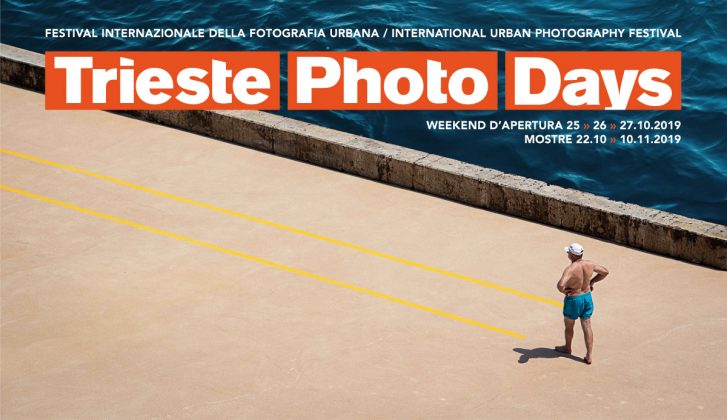